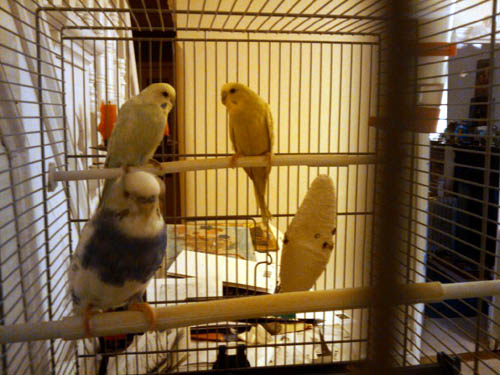 Sadly we have had to let our three budgies go to a new home. George, Mildred and Flo had been under constant attack from one of the cats and after the cage got knocked off the top of the piano once again it was decided it was unfair on both budgies and cat.

All 3 cats have had a go at the budgies and in doing so fallen attached to the cage sending, seed, shit, feathers and budgies flying. Quite how the birds have survived each time is a mystery. Diesel and Woody both did it once and never did it again but Tag never seemed to learn no matter how many times she did it. Just before Christmas we had to buy a new cage and the old one finally smashed to pieces as it hit the floor.

We weighed up the pros and cons of the cat vs budgies and decided it was better to give the budgies away. Ben and Lissi are both quite attached to Tag and if the temptation of the budgies has gone then we won’t need to have to lock her out the back when we go out. So Sarah put them on Freecycle and they’ve gone to live with a young lad who suffers from Aspergers Syndrome who love animals.