After the sad demise of Woody we talked about getting another cat, the idea was mooted that we should get a young female cat that Tag could mother instead of Woody. Then the other day one of Sarah’s colleagues asked he if she would like her daughters cat as she was moving somewhere where pets weren’t allowed. So we said yes.

Then on Friday night Louie arrived. 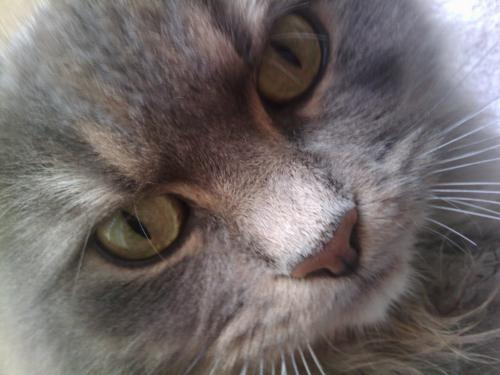 Louie is very much like Diesel, except he is grey instead of white, sort of like antidiesel and he wasn’t very happy about being moved to a new home. He hissed and growled at everyone and even woofed at us! So musch for something for Tag to mother, to mother this ball of fur and razorblades she would need a step ladder and protective clothing!

And like when matter and antimatter meet, Diesel had gone missing the night before Louie arrived. When after 48 hours had passed with no sign of him we were starting to fear the worst. I’d even been looking around the streets in case he was lying somewhere. I hoped that if he didn’t come back he’d been taken in by someone nice and that nothing bad had happened to him. It was getting to the point where we were almost starting to think about making “Have you seen this Cat” posters when I heard a pathetic squeaking at the back door, I opened it and in he sauntered as if he had only been out for 5 minutes. I don’t think he understood why every one wanted to hug him. 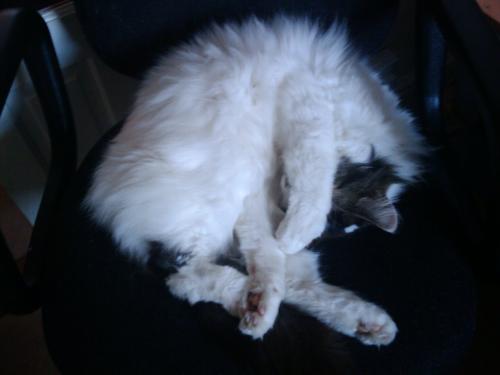 Meanwhile back to Louie! I haven’t had a cat react this badly to a new home since Oliver who sat underneath a chair in the kitchen for 2 days without moving. He is slowly coming out of his shell and has even been known to purr when stroked but the big confrontations between the two males is probably still to come! Odd thing is that Tag and Diesel now seem to be best buddies whereas before he went AWOL they were often scrapping! United against the newcomer would seem to be the order of the day.